skip to main | skip to sidebar

So we headed to Francorchamps for the 24 hours endurance race for 2CVs (we had some friends racing there, and they won!) and had some fun there playing with the kart in the paddock of the Francorchamps circuit.

Other than that, I am now able to replace the kart tires myself. To break the beats of the tires I built a small lever in my garage ... 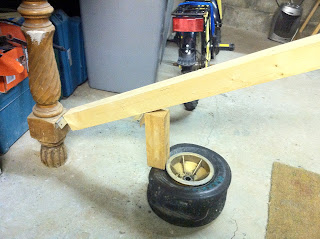 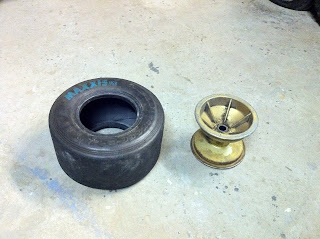 ... and I built this tire changing station (which is mostly a strong base to which I can fix a wheel hub so I have more hands to fit a tire) ... 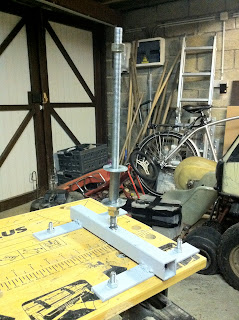 ... so that I can now put new tires on the electric kart! 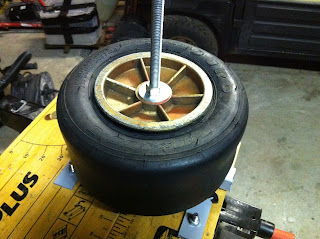 It's been a long time since we've taken the kart out to an event, but today we attended Antwerp's car free day. We took the kart out cruising through Antwerp, visiting all of the well-known places, taking our electric kart where no electric kart has gone before.

Staf and Louis came along with Tim and myself, they did the final technical checks and prepared the vehicle for launch: 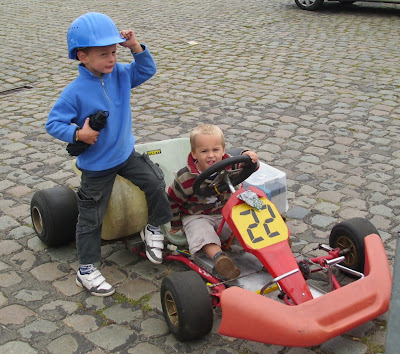 We brought a little wooden wagon to carry around Staf and Louis, but this wagon can be connected to the kart, so we can take multiple kids along for the ride. More people == more fun! In this movie, Louis is steering, but not paying much attention to the road:

Tim brought his GPS logger along for the ride and has constructed some maps of where we've been around Antwerp. We've covered over 14km on a single charge. Note that most of the time, we were pulling a little wagon with people/kids around as well so the actual range would be a whole lot more ... Our top speed (between pedestrians) was 26kph. The logger produces KML files (to be used with, e.g., Google Earth) and the following maps of some of the fun we had:

In this third part, we tested the pulling power of the kart. In the following movie (in the Nationalestraat), Tim is in the driving seat and Staf is steering, while Louis and myself are in the wagon behind the kart. We drove over 3 kilometers like this. Yes, the kart can easily pull four people (two big, two little) around the streets of Antwerp :)

After a fucking copper no longer wanted our illegal vehicle on the public road, we abused a basketball terrain for some nutty driving with the kids until the batteries got close to being drained.

Here's Tim and Marieke taking the kart out for a little drive around the basketball court.

It was another fun day with the kart! We should do this more often ...
Posted by By Anthony Liekens at 22:09 No comments:

The second stage of this project is starting to get underway. I have made an offer on a Ligier JS4 microcar, and I'm in the early planning stages of converting that little car into an electric vehicle. Compared to the electric kart, we're setting a few extra challenges.

First, we want to search and buy the separate parts ourselves without relying on a complete circuit stolen from a different vehicle as with the kart. This time we'll figure out the combination of a motor, controller, batteries and wiring ourselves.

Secondly, we want to build our first street legal car on the smallest budget possible. A microcar is allowed on Belgian roads given that it is not faster than 45kph, its power does not exceed 4000W and its weight (without batteries) is below 350kg. There's no permission or taxes on such cars, but I will need to get limited insurance for the little car.

Given our experiences from building the kart, it'll take a few months to plan and perform the conversion, so I can hopefully start driving the car on the road in the summer.
Posted by By Anthony Liekens at 14:30 No comments:

Since its completion, the kart has been in-and-out of the garage quite frequently. At each opportunity to take the kart out on the street we don't miss it. Everywhere we go, we're approached by crowds of interested onlookers, people turn their heads to see our contraption drive around, people smile. Our kart draws attention from very young to very old, and everyone seems to welcome the growing idea of using electricity as a resource for transportation. We're glad that our kart is becoming an example and a first experience for our audience. (yes, taking the kart out is becoming some sort of a performance)

Here's a long post with summaries of events that we attended with the electric kart.

The first trip with the electric kart was to HAR2009, the event that was our deadline for completing the kart. The kart was very well received by the participants/hackers/technologists/nerds/... at the conference. Over 100 visitors tested the kart. 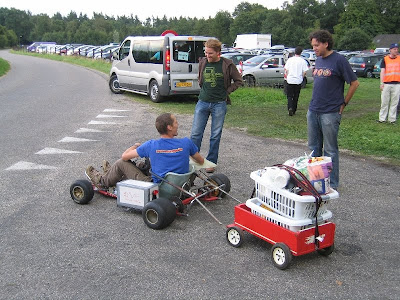 In the picture below, you can see the kart in the camping field in front of our tent. 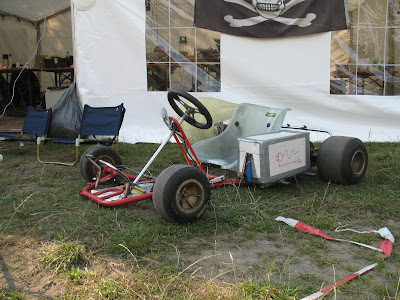 If you look closely to the front right wheel in the above picture, you'll see we encountered a small problem, a burst tire. A friendly karting center in the neighborhood provided us with new front slicks, for free! We tipped the guy who willingly changed our tires generously, this saved our weekend! 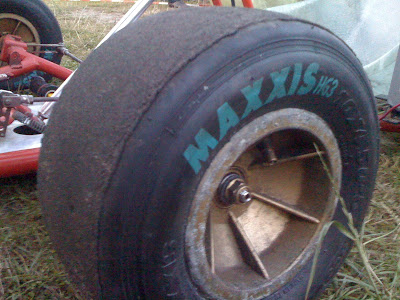 Here's the rear "blinkenlights" light for the electric we constructed while at HAR2009, doing its thing:

I love the following shot of the electric kart. Hiding from the sun behind a towel, I'm trying to get my EEE PC working on the wireless network of the hacker camp site. 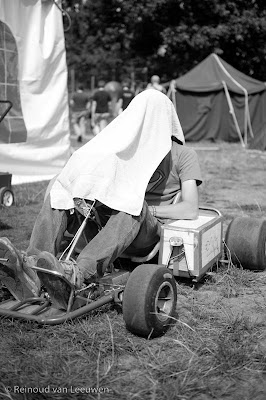 Summary: Visiting HAR with the electric kart was wicked. We had a blast with our kart and so did many others.

20 September 2009: Car Free Day in the historical center of Antwerp

On this sunday, the center of Antwerp was car free. People were invited to come onto the streets, but without their car. Well, as our kart is not considered to be a car by law, we took it downtown and drove it around in the midst of a less technically oriented audience (as compared to HAR2009). The response was beyond what we could've expected, people were very fond of the electric kart. We had various chats with many people, took the kart for some wild spins on the usually crowdy downtown streets, and had lots of fun.

Obviously, some hacking was required as well. In the following picture, Tim and Walle are fixing some wiring of the kart at a café on the central market place, smack in the middle of the historical center of Antwerp. 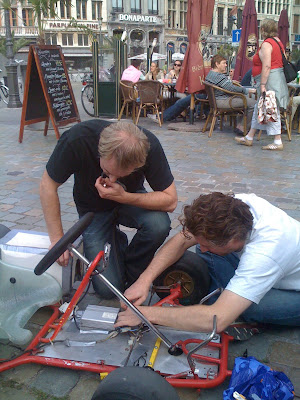 Across the street from my house is a garage that specializes in Citroën 2CV cars. Pieter, the owner of the place, has an extremely modified 2CV car that he enters in the yearly 24 hours endurance for 2CV race cars at the Formula 1 circuit in Spa-Francorchamps. 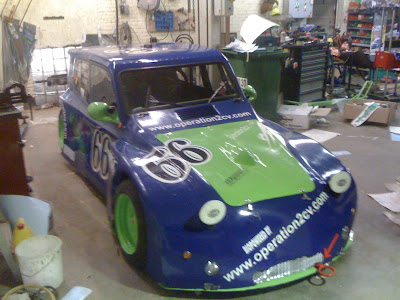 Pieter wanted to take the kart along as a gadget to drive around the terrain. He had a blast, and obviously we (Tim and Anthony) also attended the race to play around with our electric kart.

Here's the kart in a pit stop, in the same place where F1 cars come for their maintenance :)

Unexpectedly, Pieter had arranged for us to take the kart into the indoor racing track of Inkart. So I got out of work, drove down to the track and had fun to demo the kart to the track owners. 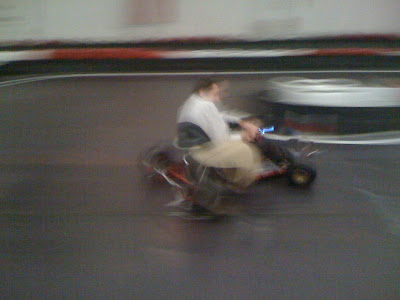 Everyone who could gave it a try driving it around the track and everyone had experiences to share. Yes, this kart drives very differently because of its non-stop high torque, batteries on more powerful karts unfortunately suck (for now) and no, you don't have the smell and sound of a gas guzzling engine. Developments in technology and the market of batteries are promising and may very soon be changing the whole market of karting as entertainment. It seems that electric karts may just as well become widespread in just a few years' time. We'll keep on evolving and developing our kart to try and get ahead of the hype. Electric kicks gas! 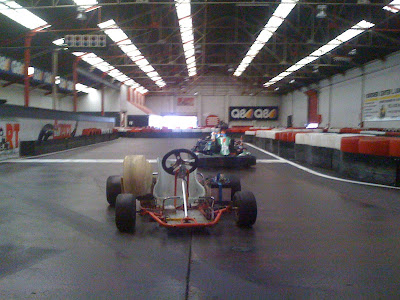 So, what's up next? Electric kart version 2.0? More soon.
Posted by By Anthony Liekens at 22:42 No comments:

Walle drifting with the e-Kart

Time to step from behind the camera and have some fun ;). Carmen was nice enough to film me testing the kart's drifting capabilities :

We noticed drifting to left is easier than to the right. This might be due to the worn tires. The other possibly is that the weight of the batteries needs some redistributing. This is something to look at together with pimp'ing it with leds during HAR 2009 ;)

Tim has worked out a simple analogue circuit for breaking and head lights.

Second video with even more drifting action from Anthony and me coming soon. Need to capture it from an analogue camera first ;).
Posted by Walter Schreppers at 15:02 No comments:

After bumping our elbows on the motor a few times, we were very happy to see Dirk bring the protective hood he made for it. A nicely constructed glas-fiber-epoxy-resin-compound-material that fit perfectly...
Here is Anthony fixing it on: 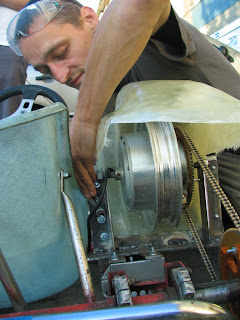 The cart with the hood attached: 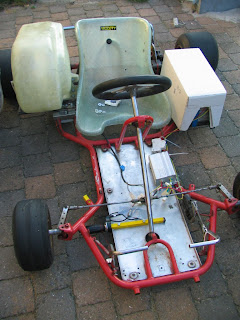 And the builder of the hood testdriving this excellent addition. Thx Dirk! 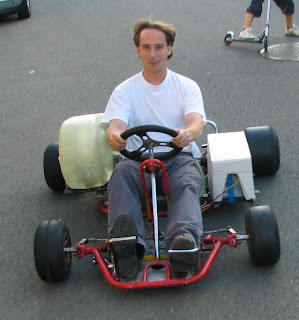 Oh and here is Anthony again enjoying the fact that now increased the safety of the cart... while driving with no hands... hmmm...

The observant viewer maybe saw that the batteries now have a cardboard cover... Not quite as high tech as our epoxy motor cover, but it keeps us from short-circuiting a55V17A system which does produce quite some fireworks... (trust us)

To close this post maybee just one more of Anthony actually trying to lose grip and skid, drift and the likes...

Photosynth of the kart

Here is an attempted PhotoSynth of the kart... (you will need to install the silverlight plugin) You can click for different angles and detail of the cart.

As we are getting more and more comfortable with the safety of the kart, we're taking our kids along in the testdrives now...

Can we create our own electric kart?

Wondering whether we can somehow conceive our own home-built electric vehicle, we bought an old go kart frame and converted it to a zero emission kart, using parts from an electric scooter. The kart is our project to showcase at the Hacking at Random technology & security conference.